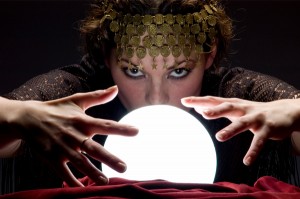 This might be the most mind-bogglingly idiotic thing I have ever seen on cable news, and I say that having seen a lot of idiotic things on cable news. CNN has now upped the ante several degrees by devoting a segment about the economy not to unemployment, not to our nation’s financial institutions, but to the question of what if f**king psychics had all the answers?

CNN’s Felicia Taylor could have chosen to focus on the current debt ceiling talks, or even how average Americans are getting by in these tough economic times. So whose idea exactly was it to ask random psychics from the streets of New York what our economy will look like down the road?

First off, let’s tackle the idea that such methods bring comfort to people who are suffering through these difficult economic times. If certain individuals wish to consult psychics to feel better about their future, go right ahead. There are dozens of articles from the last few years showing that, as the economy is getting worse, the psychic business is booming. But why in the world would this be taken seriously by a mainstream news organization?

Here’s where it gets really weird: One woman thinks she can predict the future of the economy based on Ben Bernanke‘s moon sign. (On a related note: What the heck is a moon sign?) She predicts that Bernanke will have great success sometime in the late summer/early fall, though this might not necessarily have anything to do with the economy. Maybe he wins a free ocean cruise vacation or something. And by October Bernanke is “really, really happy.” Well, that settles it, then. Show’s over, folks, you can all go home! The Fed Chairman is scheduled to be really, really happy in about four months’ time, so you have absolutely nothing to worry about!

What’s particularly hilarious about this segment is how seriously Taylor seems to take this subject and how she tries to talk about serious economic subjects with individuals who make a living making up random crap about people’s lives. Her attempts to discuss unemployment figures and the debt ceiling with psychics are about as useful as discussions of foreign policy with Call of Duty players.

Here’s a question someone should be asking Tim Geithner or Ben Bernanke:

Is there going to be job creation, enough to change the unemployment number, and that people will once again feel confident and have money in their pockets?

Taylor asked this with her hand on a deck of cards. Interestingly enough, the particular card she chose meant the economy is volatile because “it’s running all on emotions, and the emotions of people are angry.” Could this possibly be analogous to consumer confidence?

Who knows? Who cares?

Leaving aside my personal opinion that psychics are all crocks, why would you consult people on a domestic issue when they are in no way experts on the subject? With 24 hours to fill, I want to be more lenient with CNN, but the three minutes it took to air this report could have been better spent just reading off the latest labor statistics. I just worry that this is going to set off some kind of disturbing precedent. After all, do we really want cable networks filling hours of time with naught but predictions about future events without any facts or evidence to back it up?

Oh, wait, they do that already. They just call their psychics “pundits.”