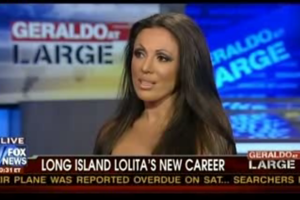 Fisher sat down with Fox News’ Kimberly Guilfoyle to catch America up on her life since we last saw her, when she was merely the minor that brought down random American body shop owner Joey Buttafuoco in the early ’90s (apparently they had silly news cycles back then, too). Buttafuoco, of course, has had a fruitful career as star of Celebrity Boxing and as plaintiff on the Judge Jeanine Pirro show. Fisher seems to have been only slightly more savvy with her unexpected fame, becoming the “victim” of a sex tape and, now, finally, accepting her true calling as a porn star. “At some point,” she explains, “it just seemed like a really good idea.”

Fisher also explains that she is a good mom of three kids, her “children have nothing to do with my career,” that she has “a lot of fans” (perhaps given her charity appearance at a Long Island strip club after the earthquake in Haiti?), and that while she has “moved on” from her past, “it’s the mainstream media that doesn’t move forward.” Ah, that darned Mainstream Media strikes again.