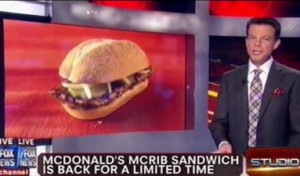 They say there’s no such thing as bad publicity, but there’s nothing better than free publicity. Like Tom Sawyer and Mr. Miyagi before them, McDonald’s has media outlets across the spectrum painting their fence for them. Everyone, from CNN and USA Today (themselves purveyors of “McNews”), to Fox News and ESPN, to, well, Mediaite, is spreading the “news” that the fast food giant’s saucy sensation The McRib “is BACK!”

The superstar sammy, available until Nov. 14, is being helped along by a social media push, but McRib Mania, unlike the sandwich itself, is organic.

Now, there are spoilsports out there who will rag on McRib’s hefty calorie count (500 per serving, 240 from fat…yummy, yummy fat), or use their celebrity (as Rainn Wilson did) to make jokes like “McRib is people! @McDonalds McRib is PEEE-PULLL!!!!!”, but love it or not, the McRib is a cultural icon. Introduced in 1981 as the result of a Chicken McNuggets-fueled shortage of yardbirds, the sandwich was developed by McDonald’s first Executive Chef, Rene Arend.

It was his genius idea to shape the sandwich like a rack of ribs, despite the fact that it’s made primarily of pork shoulder, the same cut that goes into most pulled pork sandwiches. Arend told Maxim Magazine, in a 2009 interview, “Some thought, Why not just make it round?…It would’ve been easier. But I wanted it to look like a slab of ribs.”

In that same article, a McDonald’s executive gave this less-than-romantic description of the McRibbing process:

Contrary to what its name implies, there is very little actual rib meat in a McRib. “Primar­ily, it’s shoulder meat,” explains Rob Cannell, director of McDonald’s U.S. supply chain. “The McRib is made in large processing plants—lots of stainless steel, a number of production lines, and these long cryogenic freezers. The pork meat is chopped up, then seasoned, then formed into that shape that looks like a rib back. Then we flash-freeze it. The whole process from fresh pork to frozen McRib takes about 45 minutes.”

So, even though the McRib is back, it’s actually not back. It’s shoulder.

McDonald’s is trying to help the frenzy along with a Facebook app and a top-trending Twitter hashtag, but as Spuds McKenzie will tell you, gastronomic icons are born, not made. Enthusiasm for the McRib has been thirty years in the making, but according to The Associated Press, McDonald’s is wisely resisting the urge to mess with success:

If the McRib is so popular, why not just offer it all the time? McDonald’s likes to stoke the enthusiasm with an aura of transience.

“Bringing it back every so often adds to the excitement,” said Marta Fearon, McDonald’s U.S. marketing director, who added that she’s not sure if the McRib will reappear in stores every fall.

Like most Americans, I can still remember the skeptical feeling I had as I bit into my first McRib, only to find out that it really was boneless (and delicious), and I remember the raft of stomach-turning urban legends that attended its removal from Mickey D’s regular menu in the mid-80s(don’t ask), but is its return to McDonald’s menu really news? The sandwich’s re-release has been the subject of hundreds of local and national news reports just since yesterday. In this case, the news media needs the McRib at least as much as McRib needs them. In a content-starved perpetual news cycle, McRib’s return, like the sandwich, is nothing if not filling.

Here’s Fox News’ Shep Smith delivering one such report, quoting from the AP, but tsk-tsking the McRib’s nutritional credentials. Relax, Shep, and grab a napkin: