Greenwald And Risen’s Flawed Logic: Even If Snowden’s Crime Is Victimless, It Must Still Be Punished
video

Greenwald And Risen’s Flawed Logic: Even If Snowden’s Crime Is Victimless, It Must Still Be Punished 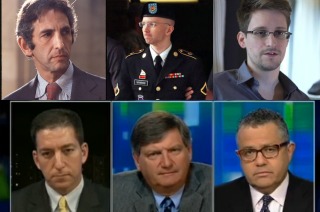 An explosive segment on Wednesday night’s Piers Morgan Live on CNN in which The Guardian’s Glenn Greenwald and New York Times investigative reporter James Risen battled with CNN legal analyst Jeffrey Toobin continues to resonate today. Their contentious exchange centered on the question of just how harmful the hostile response by some to National Security Agency Leaker Edward Snowden’s revelations has been to the national conversation on government intrusion and transparency. While both Risen and Greenwald made some good points in this exchange, they were ultimately unconvincing.

Risen and Greenwald argued that the federal government’s kneejerk response to Snowden’s revelations – to criminalize the leaker and insist that the revelation surrounding the NSA’s conduct are irreparably damaging to national security – are flawed and ultimately do a disservice to the American public. Let me begin by saying that I am a personal admirer of the work of both reporters and sympathetic to many of the arguments that they made.

When Daniel Ellsberg revealed in 1971 the information contained in the Pentagon Papers, his leaks were bitterly protested by the federal government. But, today, those leaks are seen as more beneficial than anything else. They helped restore some of the faith that Americans had lost in their public institutions during the contentious and controversial prosecution of the Vietnam War. Similarly, many of the dire outcomes some in the federal government predicted would follow Pfc. Bradley Manning’s release of sensitive documents have not materialized.

It is certainly possible that history will come to view the majority (though not all) of the leaks facilitated by Snowden in much the same way that Ellsberg’s are seen today.

However, the interview on CNN went off the rails when Greenwald objected to Toobin’s extremely plausible and even likely suggestion that the governments of both China and Russia – the latter having just today granted Snowden political asylum – have accessed the NSA documents that Snowden took with him abroad. Greenwald inexplicably asserted that it was somehow unlikely that Beijing and Moscow would now have access to the intelligence that Snowden compromised.

Further, Greenwald attacked Toobin somewhat personally, saying that Snowden had to flee the country in the first place because “the United States is filled with Jeffrey Toobins who want to take people who come forward and bring transparency to the government and throw them into a cage for decades and disappear them from our public discourse.”

This is nonsense. Even, as Greenwald and Risen seem to be insisting, if Snowden’s crime is ultimately viewed by history as a victimless one – an assessment that would be premature to make today – a victimless crime is still a crime.

Greenwald has even admitted, in a contentious exchange with Mediaite’s own Tommy Christopher on Twitter, that he would not “be outraged” if Snowden faced relatively minor charges relating to revealing sensitive and confidential documents to the press.

Reconciling the obvious beneficial aspects of Snowden’s leaks with the irrefutable fact that he violated an important law for which he must be punished is not easy. A tip of the hat goes to Toobin this time for taking the measured approach to an issue which requires critical thinking and measured analysis. In this case, neither Greenwald nor Risen facilitated much of the dialogue they claim to support by immediately impugning the motives of those who suggest Snowden’s actions were wrong.