Greenwald Blasts Critics Who Claim He ‘Aided And Abetted’ Snowden: ‘I Call That Investigative Journalism’ 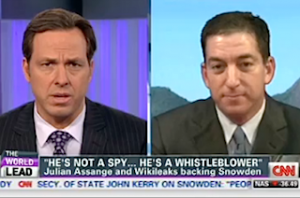 “Do you have any idea where Ed Snowden is right now?” That’s the question on everyone’s mind today and the first question Jake Tapper asked his guest, The Guardian‘s Glenn Greenwald during an interview on CNN’s The Lead Monday afternoon. Greenwald said he has “no idea” where NSA leaker Edward Snowden might be at the moment and continued to defend himself against those who have called for his arrest.

Greenwald proceeded to blast President Obama for “persecuting” more whistleblowers than any other administration in history. In light of the charges brought against Snowden, Greenwald said he is “searching for a place where he can be safe and remain free and participate in the debate and Ecuador seems to be the place he has chosen.”

Naturally, the discussion turned to the heated debate Greenwald had with David Gregory Sunday, in which the Meet The Press host suggested that Greenwald may have “aided and abetted” Snowden. Tapper attempted to avoid making similar accusations against Greenwald, but did ask if he did anything inappropriate or ethically questionable in his dealing with Snowden.

Greenwald spoke out against the “pernicious” theory that “if you’re a journalist and you work with your source and cooperate with them in obtaining documents that you think ought to be released to the public, that that’s called ‘aiding and abetting.’ I call that investigative journalism.”

“Anybody who wants to raise this insinuation against me,” Greenwald continued, “that we somehow aided and abetted Mr. Snowden, anyone who wants to raise that, let alone claim it, ought to be compelled to point to specifics or evidence to support that accusation because there is none. Otherwise it’s reckless insinuation and shouldn’t be tolerated.”