Greenwald Fired Up Over Snowden Bolivia News: ‘Rogue Nation Behavior’ To Deny His Right To Asylum 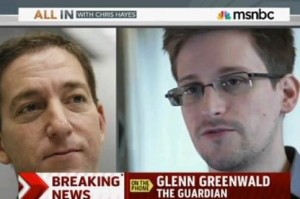 On Chris Hayes‘ show tonight, Guardian reporter Glenn Greenwald reacted to tonight’s news that Edward Snowden may have been on a plane where his fellow passenger was Bolivian president Evo Morales. Greenwald told Hayes that it’s “extraordinary” that France and Portugal actually prevented the Bolivian plane from entering its airspace because they thought Snowden was on board. He marveled at the “rogue nation behavior” from these two nations for denying Snowden’s legal ability to seek asylum.

RELATED: Bolivian President’s Plane Reportedly Diverts After Claims Snowden May Be On Board

Greenwald said, “Asylum is a centuries-old right in international law,” and lamented how apparently Western countries like France & Portugal “no longer recognize… amnesty as a valid concept of international law, and they will actually forcibly prevent other countries from granting it, it’s really rogue nation behavior.”

Hayes played devil’s advocate and suggested it’s just a “fairly standard” practice for the United States to take huge steps to get back someone who’s been charged with a serious crime. Greenwald shot back that asylum is granted to people charged with crimes all the time, otherwise asylum would basically be invalid. He cited the cruel and inhuman treatment Bradley Manning suffered after the U.S. charged him with espionage, and again slammed France and Portugal for going by the “law of the jungle.”

On the statement released Monday supposedly from Snowden, Greenwald said “the core ideas” were consistent with Snowden’s views, but suspected it was “flavored with some person who isn’t Edward Snowden” and had a “virulent tone to it that didn’t strike me as his own.”