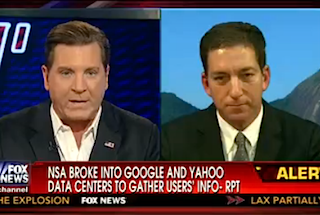 Following revelations that the NSA may have accessed Google and Yahoo data centers to possibly track Americans’ email accounts, Fox’s Eric Bolling welcomed journalist Glenn Greenwald onto his weekend show Cashin’ In to discuss what President Obama may have known about the program and when he knew it. “Do you think President Obama was misinformed or uninformed?” Bolling asked.

“I think neither,” Greenwald answered. “I think he was informed, but chose to tell the public things that he knew to be false.” He claimed Obama has “repeatedly misled the public by claiming that the NSA does not invade the content of our communications,” when “article after article” has proven that they do.

“These are mind-boggling revelations,” Bolling said to Greenwald or the material that continues to be published from Edward Snowden’s NSA leaks. He asked if we can expect more information to emerge from the documents Snowden provided to Greenwald.

Greenwald maintained what he’s been saying for months, that “the majority of very significant and even remarkable stories are yet to be reported.” He added that he’s currently working on reporting some more “shocking” stories as quickly as he can.

Before letting Greenwald go, Bolling suggested that instead of working for an unspecified Russian website, Snowden should return to the U.S. to fix HealthCare.gov. “He’s certainly very competent and well-trained,” Greenwald said. “Certainly more so than the people who seem to be running that website.”