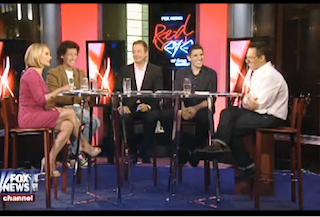 Greg Gutfeld kicked off Fox’s Red Eye with perhaps to only piece of good news to come out of the government shutdown. The Ku Klux Klan was forced to cancel a planned rally in Pennsylvania this week due to the closure of Gettysburg National Military Park. “The shutdown can’t be all bad if it causes a Klan rally to be canceled,” Gutfeld said. Gutfeld’s partner-in-crime from The Five Dana Perino threw cold water on the story by pointing out that only 9 people people were scheduled to attend the KKK rally.

“Every Klan rally is under 10 people, and it’s the same 10 people,” Gutfeld said. He posited that they might wear the hoods to trick people into thinking it’s different people at each event. Moving on to other national park closures, he then asked Andy Levy is paying security to shut down a park that already costs “no money” is a “perfect example of government stupidity.”

“It really is, Greg, very well said,” Levy replied. He quoted the managing director of another closed park, who said “In all the years I’ve worked for the national park service, I have never worked with a more arrogant, arbitrary and vindictive group.” He asked, “That pretty much sums up the government these days, doesn’t it?”

Going back to the KKK, Gutfeld asked, “Why don’t they update their look?”

Levy said, “I think the sheets are more form-fitting now. It’s more a European style to them I think.”