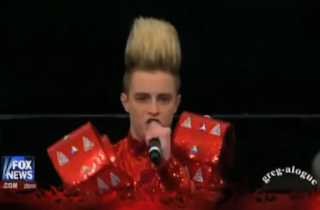 President Barack Obama’s trip to Ireland this week is sure to establish dialogue and foster peace between our two nations. But it has also made America aware of Jedward, a horrifying, Vanilla Ice inspired twin pop duo that tore last night’s/this morning’s Red Eye panel asunder, as Greg Gutfeld argued submitting the President to a Jedward concert “an act of war,” while Reason‘s Nick Gillespie submitted that only Jedward could “liberate the Arab World.”

“Jedward,” as Gutfeld explained in his Greg-a-logue last night, is an Irish pop group/reality TV creation, which performed live for the President during his trip to Dublin. Gutfeld also played a bit of the video the twins made bragging about meeting the President and, immediately after, one of Gutfeld reacting physically to the horrors of Jedward– one suspects that, unlike Meghan McCain, no one is going to stand up for Jedward this time. Gutfeld concluded his monologue with some thoughtful notes about the Arab Spring, and how much the Middle East is resisting Western influence. “When I see Jedward, I’ve got to wonder,” he concludes: “Maybe they’re right.”

What followed was a polarized panel that found themselves loving Jedward as much as they hated them. Gillespie made the point that pop culture is the strongest weapon Western culture has to influence the draconian regimes of the Middle East, though put it in the most ludicrous way possible: “Iit will be people like Jedward who liberate the Arab world becuase it’s this kind of pop craziness where you could be whatever you want to be, even if you’re from Ireland.”

Bill Schulz, meanwhile, stood up for the boys. “Oh, I guess you hate talent,” he sneered at Gutfeld for fake-vomiting at Jedward, though he was upset that their darker-haired roots were showing. “That’s in style now!” fellow panelist Leeann Tweeden protested. Meanwhile, comedian Tom Shillue seemed most confused of all. “Let me get this straight,” he asked, “These guys created Facebook and now they want a piece of it?”

Least tolerate of all to Jedward was Andy Levy, who corrected Gillespie’s assertion and added “Jedward is not liberating the Arab world– they are the reason they hate us.” Gutfeld, who by the end of the panel was wondering if “I am the problem,” couldn’t help but tease: “Can we just agree that jedward is going to be bigger than anything?” After some enraged half sentences, Levy just retorted: “You are disgusting.”