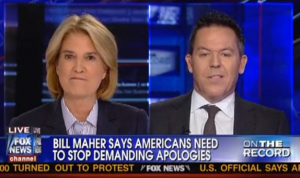 Bill Maher penned an op-ed in The New York Times on Thursday, asking for us all to just stop apologizing already. He asked, why do we think “we have the right to never hear anything we don’t like?” Appearing on Greta Van Susteren‘s show, Fox News’ Gret Gutfeld surprised even himself by saying he agreed with Maher. We need to stop apologizing, he said, because the apologies are not sincere.

Gutfeld said Maher “has a point” and elaborated:

Gutfeld and Van Susteren both agreed with Maher’s idea of an “amnesty from apologies.” Gutfeld quipped, “The definition of edgy for a liberal comedian is making fun of conservative women. That’s their game.

He continued: “And the only people that go for it is the audience that they already have. So all you can hope for is for that audience to wither away, which I believe will happen because his act is getting old.” In the meantime, he said, “don’t waste your breath demanding apologies becase the apologies aren’t real.”

Maher has a point, Gutfeld reiterated, and it’s “really, really weird because it might be the first time Bill Maher has ever been right in his life.”