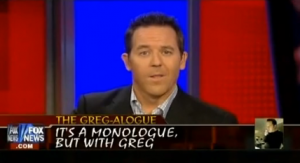 Yesterday, Fox News’ Greg Gutfeld updated The Daily Gut with a slightly different “Gregalogue.” He detailed his plans to open up a gay bar next to the forthcoming “Ground Zero mosque” so as to test the builders claims that the community center is for “outreach.” On last night’s Red Eye, he outlined his plan and discussed it in a typically irreverent style with his guests. While the idea still seems brilliant, the conversation highlighted just how thin a tightrope the satirist is walking here.

Like I said last night, the plan is incredibly clever. However, it is clear that it will only really work if it is seriously about tweaking religious persecution of homosexuals and not just about pissing off a bunch of Muslims. Some of our incredibly astute commenters have pointed out in the still going debate on that post that New York’s gays aren’t going to flock to this bar just to be a part of some Fox News guy’s beef with a mosque no matter how good the music is (and Gutfeld promises it will be great). This is going to have to work as a provocation and a business.

The different ways this can play out were made clear by the reactions of Gutfeld’s guests. As funny a guy as Jim Norton is, it’s clear he’s just into this for the sake of annoying the mosque’s planners and not about making any kind of stand on gay rights. And, while John Gibson’s concern for the safety of Gutfeld’s patrons is certainly justified, his genuine fear that they will be butchered within a community center (and not just, perhaps, by someone who has frequented it) seems pretty insensitive.

It might seem silly to try and hold Gutfeld’s idea to such a high standard, but he can do something really interesting here. He’s basically accusing the people behind the mosque in lower Manhattan of having ulterior motives than their claims of “tolerance.” If he wants to really critique them, he should make it clear that, while he obviously is trying to get under their skin, he is also honestly working for tolerance himself. Sure, that may not have been what Gutfeld originally planned, but he has a chance to do something really important here (a chance that “TV people” only get, say, once a career) and I hope he makes the most of it.