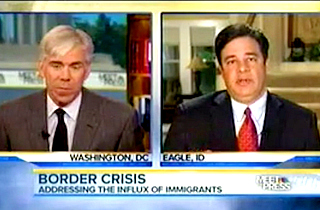 Meet the Press host David Gregory challenged Representative Raul Labrador (R-ID) on the GOP’s role in the border crisis, arguing that the House GOP had stymied immigration reform, while the law allowing minors from Central America (as opposed to Mexico) that plays a role in the crisis was passed under George W. Bush.

“The frustration is not just with the administration, right?” Gregory said. “It is Congress, it is House Republicans who blocked immigration reform, that came over from the Senate, that you opposed. But it’s also the issue of the law that is the law of the land, that was passed under the previous president, that makes it illegal to treat those illegal migrants coming from Central America as opposed to Mexico…That is the law that Congress passed.”

“In 2008 that law was passed, and I think we need to change that law,” Labrador said. “That is something that I will join the administration in doing that.”

But he added that the increase in minors crossed the border had not started after the law was passed, but only after the Obama administration announced deferred action policies. “As soon as the administration decided in 2012 to do the Deferred Action Program, that’s when the number of children started moving up, and that’s because these criminal cartels in Central and South America decided to start advertising that there was a free pass.”

“What the Obama administration needs to do is immediately deport these families,” Labrador advised. “I know it sounds harsh, I know it sounds difficult, but they’re creating a crisis that is actually going to harm these children.”