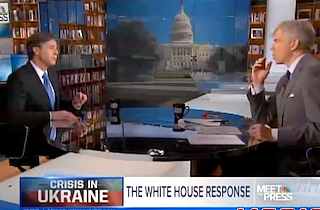 Meet the Press host David Gregory challenged Deputy National Security Advisor Tony Blinken Sunday morning to detail what if any negative impact western sanctions have had on Russia and Russian President Vladimir Putin, and what else might lay in store if Putin doesn’t back down in the crisis in Ukraine.

Gregory played a clip of Blinken from a month ago promising that initial sanctions would force Putin’s hand. “Putin’s not blinking,” he said. (You have permission to read that as “Putin’s not Blinken.”) “Putin is persisting. Are you saying he’s close to backing down?”

“Crimea is going to be a deadweight on Russia,” he said. “They are pouring billions and billions into Crimea to try to shore it up. The bloom is going to come off this rose. What’s happened is this: Putin made a compact with his people. He said I am going to deliver economic growth for you, but in return you are going to be politically complacent. Well, the growth is going to dry up. We’re already seeing projections for going under 1% this year. So that compact is eroding, and he has very hard choices to make.”

Blinken also didn’t believe that Russia would invade eastern Ukraine, though he figured Putin would try to destabilize the new Ukrainian government.

“If he were to invade Ukraine, not only would the entire international community come down on him with extraordinary pressure, but he would inherit in Ukraine a lot of people who have no desire to have Russians on their backs,” Blinken said.