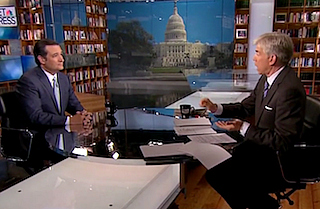 Arguing that Senator Ted Cruz (R-TX) had “lost ground” from his defunding position over the summer, Meet the Press host David Gregory asked Cruz to demonstrate the success of his strategy to defund ObamaCare via the continuing resolution.

“It is the Democrats who have taken the absolutist position,” Cruz said. “Even now what the House of Representatives has done is a step removed from defunding, it’s delaying. That’s the essence of the compromise. On the other side, what have the Democrats compromised on? Zero.”

“You make this argument as if there’s no broader context here,” Gregory said, noting the law had been passed through every branch of government, and that Mitt Romney had run in 2012 on a platform to repeal it and lost. “There are not protests in the streets arguing to do away with this law in the way that you’d like. 56% in one poll said let’s uphold the law. I’m focusing on results. Where have you moved anything?”

Cruz responded by saying that even unions were asking out of the law, but Gregory stopped him.

“I asked you a specific question based on the facts on the ground,” Gregory said. “You’ve made all these arguments. My goodness, you went and spoke for twenty-one hours to make these arguments. You haven’t moved anyone.”

“The American people overwhelmingly reject ObamaCare,” Cruz said. “They understand it’s not working. The only people who aren’t listening to the argument are the career politicians in Washington. It’s Harry Reid, who wants to use brute political force.”