Gregory, Mitchell Grill Issa Over Benghazi Report: Did You Use al Qaeda as ‘Hot Button’ During Election?
VIDEO

Gregory, Mitchell Grill Issa Over Benghazi Report: Did You Use al Qaeda as ‘Hot Button’ During Election? 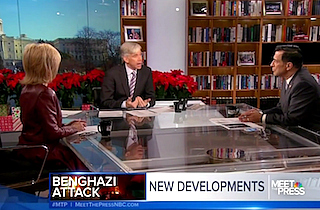 “You’ve said repeatedly that it was al Qaeda,” Gregory said. “The reason that matters is that you and other critics said that the president specifically won’t acknowledge that it was al Qaeda because it was an election year and he wants to say that after bin Laden [al Qaeda] has been decimated, and it would make him look bad if it as al Qaeda.”

“Al Qaeda is not decimated and there is a group there involved that is linked to al Qaeda,” Issa replied. “What we never said—and I didn’t have the security to look behind the door, that’s for other members of Congress—of what the intelligence were on the exact correspondence with al Qaeda, that sort of information—those sorts of methods I’ve never claimed.”

“Why use the term al Qaeda?” Mitchell asked, somewhat rhetorically. “Because you and other members of Congress are sophisticated in this and know that when you say al Qaeda, people think central al Qaeda. They don’t think militias that may be inspired by bin laden and his other followers. So it is a hot button, for political reasons, from the administration’s view.”

“But Andrea, it was accurate,” Issa responded. “There was a group that was involved that claims an affiliation with al Qaeda. Now, al Qaeda is not a central command and control. It was, in fact, a loose group that could take general statements and act on them…The fact is people from this administration, career professionals, have said under oath there was no evidence of any kind of a reaction to a video and, in fact, this was a planned attack that came quickly. That’s the evidence we have by people who work for the U.S. government and were under oath.”