Gregory to Rubio: Wasn’t Bush ‘In Same Predicament’ with Russia in 2008?
VIDEO

Gregory to Rubio: Wasn’t Bush ‘In Same Predicament’ with Russia in 2008? 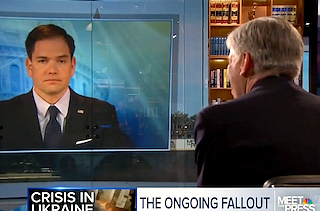 Meet the Press’ David Gregory challenged Senator Marco Rubio (R-FL) to name actions taken by then-President George W Bush against Russia when it invaded Georgia in 2008 that would differentiate his response from that of President Barack Obama to Russia’s current actions in the Crimea. Rubio responded that “previous administrations deserve criticism,” but that Russia was pathologically deceptive on the governmental level and couldn’t be trusted.

“President Bush…famously said that he thought he could the trust Vladimir Putin, only to find out what he couldn’t,” Gregory said. “And then Putin invaded a separatist region of Georgia and the U.S. didn’t do much about it. Isn’t it the same predicament here, which is: you may know what Putin wants to do, but what are you prepared to do in terms of the use of American power to stop it?”

“I think previous administrations deserve criticism as well, with regards to clearly viewing what Vladimir Putin’s goals are here,” Rubio said. “Moving forward, if you look at Secretary Kerry a moment ago mentioned success with the START Treaty. Yet we know the Russians have basically violated every major treaty they’ve ever entered into. We’ve seen how they’ve basically lied. Let’s call it what it is: they are lying. This government is basically a government of liars, the Russian government.”

“You’re dealing with a government that lies as a matter of course,” Rubio continued, “and it’s very difficult to enter an understanding with them on anything when they are willing to lie and cover things up in this way.”

Rubio recommended that the United States move quickly with allies to isolate Russia and do everything possible to prop up Ukraine’s transitional government.