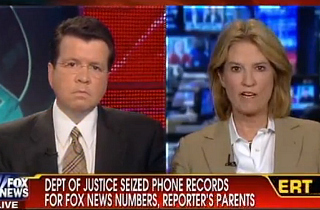 Van Susteren tweeted earlier today that her friends and colleagues won’t call or email her for fear of being tracked by the government. Speaking with Cavuto, she suggested the DOJ’s actions run deeper than just the Rosen incident:

“It’s not just the Justice Department going after our phone records, there’s been a little bit of sort of a systemic view of this administration against us. Take the fact that the State Department, last October, had a media-wide conference call on Benghazi and left Fox off it. […] They said it was ‘inadvertent.’ A few weeks later the CIA gives a media-wide briefing about Benghazi and who wasn’t invited? Fox wasn’t invited. So we’ve got the State Department and the CIA both keeping us out of the loop, or trying to, on a story we’re aggressively investigating.”

“There’s sort of an attitude about this that makes me suspicious,” she added after explaining the circumstances behind the government’s investigation into her colleague Rosen.

Cavuto noted that the leaker of information regarding the killing of Osama bin Laden seemingly got a pass while the leakers behind stories that “aren’t necessarily making [Obama] look good” get hunted down.

Van Susteren added that the DOJ’s obtaining of Associated Press phone records is similar to the “Fox News Channel treatment” because of how the administration was unhappy with the way in which the news collective reported a leak regarding potential terror threats.