Greta to Joan Walsh: Why Are You ‘Acting So Dopey?’

Greta to Joan Walsh: Why Are You ‘Acting So Dopey?’ 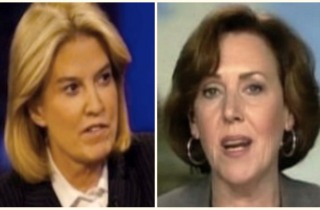 Van Susteren was moved to write a fairly lengthy post hacking away at Walsh for a tweet the Salon editor sent out over the weekend in which she suggested Fox News would likely have been pro-slavery had the channel existed during that time period. The post is headlined, “Why is Joan Walsh acting so dopey?”

“First, I would hope Walsh would show more intelligence than her broad brush about Fox News,” Van Susteren wrote. “Generalizing is just dopey and makes her look ignorant.”

Van Susteren went on to say she’d like to prove Walsh — who is also a political analyst at MSNBC — wrong by introducing her to some other Fox News people who are, Van Susteren says, not the slightest bit racist. (Walsh memorably met Bill O’Reilly in 2009.)

Second, job creators crack? What does she know about job creating? I bet she has never run a business, never hired a single person but instead been on someone else’s payroll her entire life. Big difference!

Van Susteren concluded her post by dimissing Walsh as “just a talker” and “a tweeter.”

Mediaite did not seek comment from Walsh on this matter because she, perhaps out of pride, did not acknowledge our previous request for input.