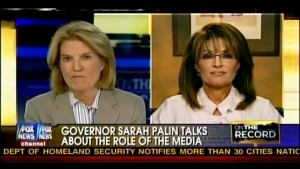 Sarah Palin is inching ever closer to announcing a presidential run. The former governor visited Greta Van Susteren tonight and teased she had “the fire in the belly” to do it, but that much of the criticism from the media was teetering close to too much for her and her family to bear. Van Susteren took the comment defensively as Palin challenged her to “lead” her colleagues away from the harsher reporting, to which Van Susteren replied, “don’t take the bait.”

While not a tempestuous debate by cable news standards, Van Susteren struck at a core of Palin’s anti-media philosophy that caught her flat-footed. The specific types of stories at issue were, as Palin described them, “hoarded emails by a disgruntled former employee,” family gossip, and other “petty stupid things” Palin tried to command Van Susteren to not “come after us with.” After initially asking Palin why it seemed she was so sensitive after years in the spotlight (“that kind of stuff sticks at the beginning, but after a while it’s like, ‘really?'”), Van Susteren then simply told her not to take the bait when prompted. Palin replied that it was “impossible” to not nab the bait when emailed about “something or another about the kids” and “the story is going to go to print anyway.”

Palin did cede that she believed the personal lives of politicians are fair game, so long as they illuminate how that person would govern. But she had a problem with this, too: “It’s only conservatives,” she noted, who are subjected to the private scrutiny (apparently Bill Clinton, John Edwards, Eliot Spitzer, Jim McGreevey, and the entire Kennedy family don’t count). “Some of the stuff stings and hurts, but that’s part of the process,” Van Susteren retorted, adding that she saw it as more of a gender issue than an ideological one and noting that some of the most vicious criticism she had seen had been against Hillary Clinton and Nancy Pelosi.