Greta Van Susteren Challenges Sarah Palin Over Tea Party: ‘There Is A Disregard For The Facts’ 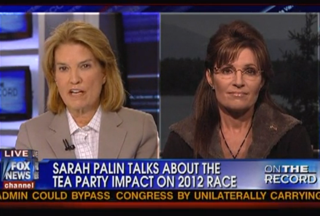 It’s a good bet that, when challenged to defend the Tea Party, Sarah Palin won’t balk from the challenge. Tonight, however, that challenge came in the name of a conservative, as Greta Van Susteren pointed out the group is targeting conservative stalwart Sen. Orrin Hatch for being too liberal. Van Susteren asked Palin how she would respond to their attempt to unseat him, to which Palin replied that she had admiration for the “good things” Sen. Hatch had done, and extremist elements were in “every group.”

Coming out of a conversation on President Obama’s seemingly nonexistent jobs plan, Palin predicted he “will try another stimulus package again, I’m sure,” and recommended President Obama “embrace more of [the Tea Party] movement” rather that stick to “parochial and obsessive partisanship” as exemplified in Congress (presumably not by the very willing-to-compromise Tea Party Congressmen).

On that note, Van Susteren didn’t permit Palin to make the claim unquestioned, pointing out that she had written in her blog today about an attempt to unseat Sen. Hatch. “If you do a little research,” Van Susteren noted, it was easy to find that Sen. Hatch was a longtime champion of the balanced budget amendment, and that he had been ardently against excess spending for decades. “Some of these people in the Tea Party movement won’t recognize it. They won’t look at the facts,” she argued. “Within the Tea Party movement, there is a disregard for the facts.”

Palin retorted that “you’ll find that within any group, especially when it comes to politics,” and it did not concern her too much. As for the Senator specifically, Palin had nothing but praise. “He is doing good in trying to get a balanced budget amendment,” she argued, suggesting his conservatism should be acceptable for the mainstream in the Tea Party.