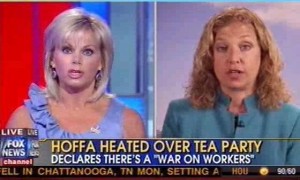 DNC Chairperson Debbie Wasserman-Schwartz appeared on Fox and Friends this morning, ostensibly to discuss the competing jobs plans that are set to be put forth this week by the White House and GOP candidate Mitt Romney. The conversation quickly turned to the controversy/distraction du jour: the recent anti-Tea Party comments made by Jimmy Hoffa in which he said “let’s take these son-of-a-bitches out!” Things became rather heated between host Gretchen Carlson and Wasserman-Schultz.

First some background: President Obama spent the better part of the holiday weekend campaigning in the Midwest, and much to the chagrin of the White House, the news this morning is primarily focused on what many see as the incendiary comments made by Hoffa.

While warming up the crowd for the Commander-in-Chief’s later remarks, the union leader inspired the pro-Union crowd by saying, “Everybody here has a vote. If we go back and we keep the eye on the prize. Let’s take these sons of bitches out and give America back to America where we belong.”

Some have reasonably argued that the alleged incendiary portion of the comment (the “take these sons of bitches out”) was prefaced with “everybody here has a vote,” which seems to add up to the more common phrase of voting someone out of office. But that’s not the convenient nor conflict-based meme that makes for a sexy (and dumbed down?) news narrative. The takeaway from the weekend? Hoffa said “let’s take these sons of bitches out,” or a declaration of war on the Tea Party movement.

The response has predictably focused on the hypocrisies of irresponsible hyperbole and violent campaign rhetoric going back to the controversy surrounding Sarah Palin‘s SarahPAC, cross-hair’s on campaign imagery and the shooting of Gabrielle Giffords. (You will recall the call for the new tone?)

Cut to this morning’s appearance by the DNC chair on Fox and Friends. When challenged to rebuke Hoffa’s comments, Wasserman-Shultz punted, refusing to speak about the comments directly, staying focused on the economic woes that her constituents and most American’s are currently facing. This line of defense seemed to exasperate Carlson, who, when challenged by the DNC about violent Tea Party rhetoric, defended her fair and balanced approach by her central position on the Fox and Friends “curvy couch.”

So is this a big news story? No. The Tuesday morning after Labor Day weekend is one of the more challenging news days of the year, as producers, programmers, and news directors look for anything to trump up as a news controversy. As for Hoffa’s comments, taken out of the voting context it sounds pretty irresponsible. But imagine someone were to publicly say “I have a camera, stand over there because I would like to shoot you,” and then have everyone pull the “I would like to shoot you” portion of the comment.