Gretchen Carlson Goes Off On Obama Over Fiscal Cliff, ‘Photo Op’ With Romney 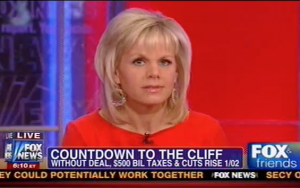 Gretchen Carlson was none too pleased this morning during Fox & Friends‘ segment about President Barack Obama‘s lunch with Mitt Romney and… the fiscal cliff. Frustrated with the seeming lack of negotiation, Carlson criticized the president’s approach to the issue.

The lunch between Obama and Romney is just a “photo op,” she said. Were it President Bill Clinton, she added, there would have been a chance that the pair would actually exchange ideas. Responding to Steve Doocy‘s comment that some said Obama would offer Romney a “Secretary of Business” position, Carlson incredulously asked, “Really? … What percentage of people watching right now” think that? It would be “fantastic,” she said, “but I doubt it.”

She went to say it was “annoying” to see the president give another “campaign speech” yesterday — instead of sitting down and tackling the problem. “Why would the president be in a negotiation position?” she asked. “He won re-election.”

With a quip about Obama not being able to blame his predecessor this time around, Brian Kilmeade segued into a portion of Obama’s remarks, wherein he urged agreement on a framework, saying they could work on a comprehensive plan next year.

As for the president saying they can reach a comprehensive deal after January, she asked, “Who believes that?”