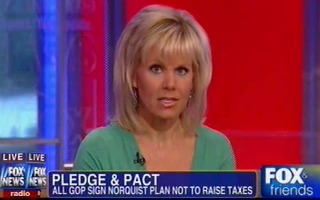 With the “fiscal cliff” looming and the lame duck 112th Congress preparing to head off disaster before it strikes, Washington’s focus is on the details of a deal that would provide the government a way to avoid dramatically increasing taxes on all Americans in January. With Republicans in the Congress set to raise taxes and break Grover Norquist’s Americans for Tax Reform pledge, many in the media are questioning whether lawmakers should be bound by pledges to outside groups in the first place. Now, Fox & Friends host Gretchen Carlson is joining their ranks. On Monday, Carlson said that she thought Norquist’s pledge has made it difficult for Republicans to govern.

“I think you get into really difficult situations in relationships in general when you make people sign on the dotted line and then you crucify them if they ever decide to change their mind,” Carlson said of Norquist’s group’s pledge.

Carlson said that she was not saying that Republicans in Congress should unanimously decide to raise taxes without there being agreed to cuts in federal spending by Democrats. However, she said the GOP has gotten itself into “sticky water” after signing a pledge that lawmakers then feel they cannot ever break.

“Some people, they stand for something,” Steve Doocy pushed back.

“I agree with that,” Carlson replied. “But then they should stand for it on their own. They shouldn’t have to sign a pledge from somebody else.”