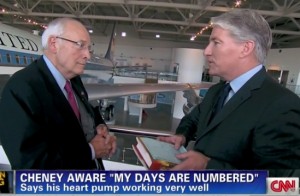 “When writing this book, I don’t mean to sound morbid,” CNN’s John King began, while interviewing former VP Dick Cheney at the Reagan Library, “but were you thinking, ‘My days could be numbered?'”

Mission: not accomplished, Mr. King, but Cheney followed up with a retort that would drop the temperature on Hoth by a couple of degrees: “So are yours.”

Say what you will about Cheney, he owns his persona.

King pegs the rest of the segment to Cheney’s famous health problems, pointing out that the former VP, who has had five heart attacks (but, for the record, has live-tweeted none of them), is a walking bellwether of medical advancement. Cheney showed off his vest-enclosed heart pump, which has been the subject of some predictable Darth Vader humor. As The Daily Show’s Jon Stewart noted, though, hearing Cheney describe his health struggles has a strangely humanizing effect.

True to form, though, Cheney pushes back on that effect. King asks him if he hesitates to get a heart transplant because people might think he was getting preferential treatment. Cheney waves the notion off like a bad appetizer. “No, no, I’m not worried about that.”

King manages to further humanize Cheney by getting him to reflect on whether his now-deceased mother would be as proud of him now as she was before she passed. “I would like to think that she would approve of the latter stages of my career. She passed shortly after I left the Defense Department, so she never knew I got to be Vice President. But she would’ve loved it.”

King finishes by giving Cheney an opportunity to respond to critics who think he should have used his book to apologize. Not a chance. “There’s a certain group who don’t think you’ve written a book until you’ve used it to apologize for whatever it is they disagree with that you did. I don’t worry about that.”

In case you missed it, here’s Jon Stewart’s take on the humanizing effect of Cheney’s health problems: (from Comedy Central)