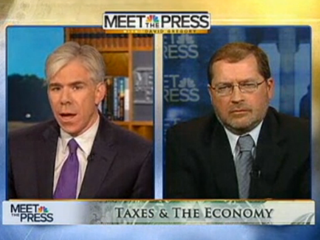 The man who has been catapulted into the spotlight as the single most important political character in the collapse of the Congressional Supercommittee on the budget is still saying no to any and all taxes. Grover Norquist the Americans for Tax Reform head who, despite not being a public servant or member of the media, keeps having fingers pointed at him for pulling the strings in the Republican Congress was on Meet the Press today and explained, once again, that his tax pledge was not with him but “the American people,” and the alternative was letting Democrats solve their perceived problem: that “the peasants aren’t sending enough cash in for the king to spend.”

RELATED: Grover Norquist: It Is ‘Sort Of Funny’ That Democrats Blame Me For Super Committee Failure

Norquist sat down with David Gregory, and answered whether he believed the initial Republican tax proposal rejected by the supercommittee was a “sham.” “It made clear that Democrats have no interest in tax reform,” he replied, noting that the commitments that Republicans have made with the American people through his pledge are “important commitments, those are public commitments,” as opposed to the “secret commitment” Democrats have made to raise taxes. Rather than consider the Republican position unreasonable, he argued, question instead “the guys who wants a trillion dollars more of your money to waste.”

Gregory then turned to the more realist element of the debate: “what makes you so sure you will triumph” and a Republican president will not rebuke your pledge? “I don’t think a Republican would be likely to win a Presidential election in the general if it wasn’t clear that he wanted to go in a different direction than Obama,” Norquist replied. “If you want to raise taxes to pay for Obama’s bigger government, then you vote Democrat, for crying out loud.” He noted that all the Republican presidential candidates save Jon Huntsman had signed his pledge, and noted that an otherwise successful President like George H.W. Bush could be defeated by making a wrong move on taxes.

RELATED: Joe Scarborough: Obama Has Been AWOL, But Grover Norquist Has ‘No Power’ In D.C.

The problem in Washington, Norquist concluded, was misspending and not, as Democrats claimed (in his words,) that “the peasants aren’t ending enough cash in for the king to spend.” He approved only of a leader who would say “I’m not going to raise your taxes because you’re not the problem, America.”