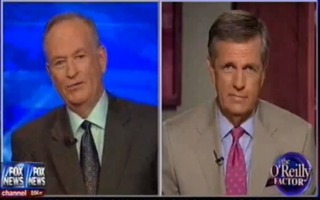 More conservative pundits are joining in calling for Republican presidential candidate Mitt Romney to release a significant number of tax returns from past years. On Tuesday, a new poll showed that a majority of voters agree with those conservative critics – as well as the reelection campaign of President Barack Obama – that Romney should release his tax records.

On Monday, Fox News senior political analyst Brit Hume told Bill O’Reilly that he didn’t see the tax records issue making a difference among voters, but “anytime it’s an issue between disclosure and non-disclosure, you always wonder whether it’s better just to put it out there.”

Hume says that the release of those tax records would show that Romney is both rich and has offshore bank accounts. “I guess the Obama team would have some sport with that for a couple of days and the media, in its cooperative way, would play along,” said Hume. “But I’m not sure how much that is going to matter.”

Hume continued, saying that the electorate is going to be well aware by November – if they are not already – that Romney is a wealthy man. “If you don’t trust the private sector and you don’t trust rich guys, you’re not going to vote for him anyway,” Hume concluded.

Hume joins Weekly Standard editor Bill Kristol who said on Fox News Sunday that Romney needs to release as many his tax returns as he can – approaching the decades of returns he submitted to Sen. John McCain in 2008 when he was being vetted for the vice presidency.

Those prominent conservative voices, backed up by consistent pressure from the Obama campaign, are joined by a majority of the electorate. A poll conducted last week by the Democratic firm Public Policy Polling on behalf of the Service Employees International Union / Daily Kos showed that 56 percent of registered voters, and 61 percent of independent voters, say they want Romney to release his last 12 years of tax returns.

The calls for Romney to release his returns, as well as the Obama campaign’s relentless attacks on Romney’s tenure at Bain Capital, do not appear to be taking a toll on the head-to-head polling numbers. In the SEIU/Daily Kos poll from PPP, Obama leads Romney by 48 to 46 percent with 7 percent undecided.

Nate Silver, political analyst with the New York Times, wrote earlier that the race has largely been stable over the course of the last several months showing that the Bain attacks have had a limited impact on his overall support. PPP’s Tom Jensen made a similar observation on Twitter when he wrote “For the last month now we’ve found Obama at 48% or 49% and Romney at 45 or 46% every week. Basically no fluctuation.”

Silver’s point was that Romney was overreacting to the Bain attacks by demanding an apology from the Obama camp for saying he could be guilty of a felony. But the Republican presidential candidate’s GOP critics have largely drawn a distinction between the attacks on Romney’s record at Bain and his tax records. Hume told O’Reilly he does not see the issue resonating with voters, but the PPP poll shows that if Romney withholds his tax records it could harm his support among the electorate.

While the polls show Romney can survive the Bain assault by the Obama campaign, they also suggest that the tax records issue will hurt Romney with voters in the near future. It remains to be seen whether Romney will take the well-meaning advice from his political allies.