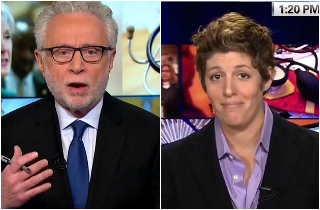 “Let’s take a bigger picture here,” Kohn said. “This was not a hearing. This was harassment. This was Republicans who are tired of flogging the Obamacare bill, saying all right, we’re going to try and flog Kathleen Sebelius. The irony is this is the same committee trying to say, ‘Oh, we’re so concerned people can’t sign up for this thing that we wanted to destroy it in the first place, and meanwhile we’ve been working for weeks to try and log with all these paper requests and all these data processing things and overwhelm all the other places that people can go up around the country to sign up other than the website.’ So they’re literally trying to destroy the path to Obamacare every point. They have no credibility to have a hearing like this.”

“Just when I think my presence is unnecessary, that the problems of Obamacare are self-evident, then Sally can turn this into something about Republicans,” Blaze columnist Will Cain replied. “This isn’t about Republicans. I think everyone who’s gone to HealthCare.gov can see this has nothing to do with conservatives and Republicans anymore.”

Blitzer told Kohn that the hearings under Democratic leaders were as pugnacious, if not more so.

“I’ve covered this specific committee for a long time,” Blitzer said. “The Democrats were the majority for a long time. Henry Waxman (D-CA) was the chairman for a long time, John Dingell (D-CO) before him. If you think this was a testy hearing today, go back and take a look at some of the hearings that either Dingell or Waxman chaired going after Bush administration officials on all sorts of issues. It was at least of as tough as it was today, and probably even tougher. Those guys were pretty powerful, pretty strong chairmen of this specific committee. It’s got a reputation for being tough on the opposite party, if you will, if they’re the majority in the House. Just a little footnote from the hearings I’ve seen even over the years.”