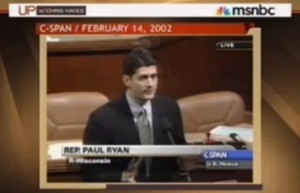 Newly-minted vice-presidential candidate Paul Ryan was already having a bad first week of running-matery when he told a reporter that he “never asked for stimulus,” only to be later confronted with letters in which he did exactly that, letters in which he extolled the job-creating virtues of stimulus funds. On Sunday morning’s Up with Chris Hayes, host Chris Hayes dug Ryan’s shovel-ready hole a little deeper with some devastating archival videos that show Ryan arguing for stimulus more forcefully than any Democrat.

With the Romney/Ryan ticket already losing the fight they knew they were going to have, they needed this stimulus story like they needed a knife in their Granny’s necks. When Ryan told an Ohio TV reporter that he “never asked for stimulus,” however, he opened a can of worms the size of Cleveland. Ryan also told that local reporter that he “opposed the stimulus because it doesn’t work.”

As it turned out, Ryan had secured tens of millions of dollars in stimulus funds by writing letters praising the program. Ryan’s office explained that he was just trying to help some of his constituents out…with something that he says “doesn’t work.”

That’s pretty bad, but “a constituent made me do it” is the kind of answer that might satisfy people, especially the Ryan-enthralled mainstream media. Enter Chris Hayes, who set the table with a 2010 clip of Ryan blasting “borrow and spend” policies as a failed experiment, followed by some Bush-era clips of Ryan forcefully advocating for those exact kinds of policies, while also acknowledging that unemployment often drags on in a recovery. The fact that Paul Ryan is making arguments in these clips that could serve as campaign ads for President Obama isn’t the most surprising thing about these clips, though:

What is surprising is that, while Romney, Ryan, and the Republicans are running around attacking the President’s economic record, no one on the President’s side is making these arguments this well. Despite the fact that the stimulus did exactly what it was promised to do, and the fact that the President’s job creation record since the Bush Effect wore off is pretty damn good, the President and his team have downplayed them because the political media has made the calculation that those aren’t winning arguments, that if things are still bad, people don’t want to hear how much worse they could have been. However, flat poll numbers for Romney following recent poor jobs reports would seem to indicate that people get that argument, to some extent.

As Hayes and panel also pointed out, it’s not as if 2002 Paul Ryan came to Jesus after passing several stimulus packages under President George W. Bush. In 2009, he voted in favor of a competing $715 billion Republican stimulus package.

Liberals are often too enamored with hypocrisy arguments, though, as Hayes mentioned at the start of Saturday’s show (but fir different reasons). The notion of hypocrisy strikes at the character of the hypocrite, rather than at the ideal they’re not living up to. In my view, these arguments obscure the real problems with Republican views and policies, which is that they’re wrong.

Don’t judge Paul Ryan and Mit Romney on whether they have always thought the same things they do now, or even on whether they magically, coincidentally changed their minds when Barack Obama became president. Listen to what Ryan said in 2002, or what Romney said in 2004, and what they’re saying now, and decide, for yourselves, which of them makes more sense.

In 2002, Ryan said “What we’re trying to accomplish is to pass the kinds of legislation that, in the past, have grown the economy and gotten people back to work,” which is true, and verifiable. Now, he insists the stimulus didn’t work, despite the fact that he wrote letters indicating the opposite, and despite the fact that the stimulus did exactly what it was designed to. Ignore the hypocrisy, and focus on the fact that Paul Ryan is beating himself in this argument.