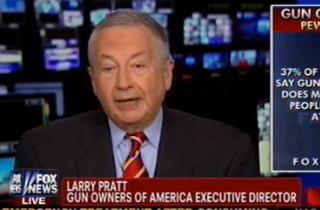 Gun Owners of America executive director Larry Pratt appeared on Fox’s America’s Newsroom this morning to defend the National Rifle Association’s controversial new ad that calls President Obama an “elitist hypocrite” for sending his daughters to a school with armed guards while questioning the NRA’s proposal to put more armed security in schools.

Pratt told host Martha MacCallum that the ad was “spot on,” adding that it “points to the hypocrisy that we see so much from our ruling class, and it underscores the need that we’ve been pointing to that if we’re going to get serious about protecting our children, we’re going to do away with the ‘gun free zone’ requirements in federal law, which have created a magnet for these mass murders.”

“It’s what we would expect, but we also would expect the same for us,” Pratt answered. “This is a democracy. This is a country where we are all equal before the law, and to have special privileges for others that wouldn’t necessarily extend to us common people goes down a little hard.”

After the pro-gun advocate praised Rep. Steve Stockman for threatening impeachment in the face of Obama’s potential executive orders on gun control, he concluded, “This is a serious confrontation. The president seems to be convinced that the American people don’t need to be able to protect themselves. It’s okay if he has Secret Service, but forget the rest of us.”