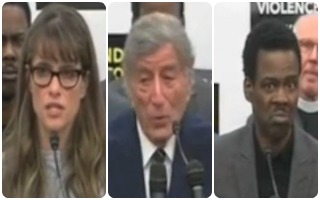 The “national conversation” about gun control has become a distinctly circular one in recent weeks. With nearly two months having elapsed since the tragic massacre in Newtown, Connecticut, gun control advocates and opponents have made their arguments, debated the merits of the other’s positions and, for the most part, have agreed to disagree. But for gun control advocates, the conversation never ends – even if the only people still listening are those already in agreement. A case in that point was made today when a cavalcade of Hollywood stars joined several prominent Democratic politicians to “demand a plan” to address gun violence.

Joining a handful of Democratic mayors, Congressmen and appointed officials today for a news conference with the object of demanding a plan — or, more accurately, legislative action of any kind without regard for its efficacy – were celebrities like Amanda Peet, Tony Bennett, and Chris Rock.

While addressing the press, Peet made the argument that any new gun laws were likely to be only marginally effective. She said that proposed new gun rights restrictions were unlikely to prevent either a future Newtown massacre or the common street violence that plagues American cities. Nevertheless, she insisted that the nation must do something.

You pesky people with your annoyingly persistent questions about “effectiveness” and “practicality.” What place does deliberation have in crafting public policy anyway?

Peet seems to think dismissing individuals with valid concerns about unintended consequences or even the constitutionality of new gun laws will make them go away.

“I’d like the assault weapons to go to war not in our own country, and I’d like assault weapon eliminated,” Bennett told the assembled members of the press, presumably just in case you were curious as to where he stood on the matter.

“I’m just here to support the President of the United States,” Rock added, revealing just how much he cares about the substance of this press conference. “The President of the United States is our boss, but he’s also, you know, the president and the first lady are kind of like the mom and the dad of the country. And when your dad says something, you listen, and when you don’t, it usually bites you in the ass later on.”

This is not advocacy. This is not an effort to convince or even persuade gun control opponents to reconsider their antagonism towards new restrictions on Americans’ Second Amendment rights. These are individuals who do not believe the other side has a valid argument, so they do not offer a valid argument in response.

An example of this increasingly evident pattern of argumentation among gun control proponents can be found in a recent opinion piece by the Toronto Star’s Heather Mallick. “If Americans knew what bullets did to human flesh, they’d support gun control,” Mallick began, displaying all the depth of a koi pond. “So perhaps they should be shown in living colour what bullets do to small bodies. A mere description is insufficient for the literal-minded.”

She calls for the bodies of the children slain at Newtown to be shown to the public. Like the images of President John F. Kennedy and Emmitt Till, Americans, in Mallick’s view, are simply ill-informed about what gun violence looks like.

Those who support new gun laws are no longer speaking to the skeptics. They are talking to each other, and they like what they hear.