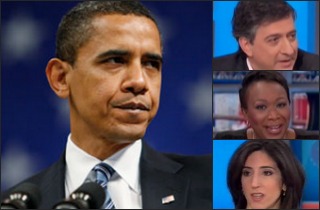 The debate over stricter gun control laws appears to be the hill that progressive Democrats want their congressional representatives to fight on regardless of the odds stacked against them – maybe even because of those odds. On Monday, one progressive voice on MSNBC’s Now called some Democratic lawmakers representing purple states “chicken” for failing to champion new gun control laws, even if that means risking the Democratic Senate majority and President Barack Obama’s second term agenda. The idea that Republicans and pro-gun rights advocates could defeat their progressive legislative aims is, apparently, too terrible an outcome to contemplate. They would rather go down swinging.

After spending the first several minutes of a segment on gun control going to absurd lengths to suggest that Republicans and the National Rifle Association remain the primary obstacles in the way of new gun control legislation – and not the Democratic leadership in the Senate which has regularly balked at forcing their vulnerable members to take risky votes – POLITICO’s Jake Sherman offered a much-needed dose of reality.

“I think it’s important to say that there’s actually no momentum,” Sherman said referring to the pace of gun control legislation. “People are saying on TV that there’s a lot of [pro-gun control] momentum in Congress and in Washington to get this done, but that’s actually not the reality at all.”

Sherman’s implicit rebuke of the very panel on which he was sitting could not have endeared him to this panel’s more willfully obtuse members.

Sherman went on to indict President Obama for engaging in a campaign designed to agitate for stricter gun control laws rather than seeking a compromise behind closed doors. Sherman said Obama’s behavior frustrates Republicans and makes a deal on gun control less likely. The POLITICO reporter did not continue with the logical progression of this thought process and conclude that Obama’s actions suggest he is not interested in achieving a compromise with Congressional Republicans on gun control in the same way he is with immigration reform.

Predictably, MSNBC’s panel guests jumped off Sherman’s thoughtful addition to this segment with the outright accusation that Obama’s opponents are simply deranged.

Guest host Joy-Ann Reid then highlighted recent public opinion polling which showed that universal background checks – the least ambitious gun control proposal to emerge in the wake of the Newtown massacre, but one of the last proposals with much of a chance of passage through Congress – remain broadly popular. Citing polling conducted by Mayor Mike Bloomberg’s pro-gun control advocacy group, Mayors Against Illegal Guns, Reid lists four states with voters who support background checks: Louisiana, Montana, North Carolina, and Arkansas. Each of these states delivered their electoral votes to Mitt Romney in 2012 and is home to a Democratic senator up for reelection in 2014.

The deliberative and loyal Democrat with a background in legislative affairs, Jimmy Williams, could see where this was going and speedily applied the brakes to the conversation.

Reid concluded by noting that, for her money, McConnell is already the de facto leader of the Senate.

A conservative estimate suggests that at least eight open or Democrat-held seats in the U.S. Senate which are prime targets for Republicans in 2014. Some would suggest that more could be added to that tally. Republicans need to win six to regain full control of the upper chamber of Congress.

Those few Democrats who recall how gun control was used by Republicans in the 1994 wave midterm election are concerned about what a myopic push for new gun laws by the progressive left could do to the party in November of next year. Those Democrats know that, no matter the polling today, stricter gun laws will be viewed in a more negative light after months of messaging and campaigning.

Those pro-gun control progressives seem more interested in fighting the “good fight” and losing than winning elections. Activists, by definition, are in the business of agitating for a cause; winning elections is an ancillary accomplishment in the battle to change the ideological trajectory of the country.

Sound familiar? It should. This is the mission statement which led the GOP’s tea party wing to nominate unelectable candidates in winnable races over the past two cycles. It has resulted in an all-out sectarian struggle for control over the soul of the party. The abandonment of gun control as a legislative priority by Democratic politicians in Washington could provide the impetus for the formation of a progressive version of the tea party. Bloomberg is already funding an effort to force Democrats to the left of their constituents. A progressive grassroots push could cement the whimsical priorities of a wealthy metropolitan mayor politician into a true movement.

If MSNBC’s Now is any indication, liberal are perfectly willing to sacrifice the Democratic Party’s majority in order to achieve personal ideological vindication. Republicans are certainly cheering them on.