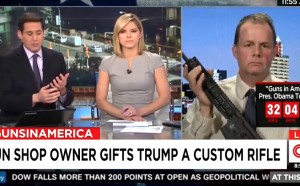 If you’ve ever wondered what it would look like if a First Order stormtrooper did a cable news hit while his armor was at the dry cleaners, today is your lucky day. Mark Limoges, the New Hampshire gun owner who gifted a brand-new custom AR-15 to Donald Trump, not only came to the remote studio armed to the teeth, he held his weapon at the ready throughout the interview. To be fair, though, there’s only so much protection the double-box affords you when you’re up against deadly efficient killers like John Berman and Kate Bolduan.

Speaking of that interview, Berman asked Limoges about President Obama’s executive actions on gun regulation, which prompted the familiar, contradictory reaction that they’re so weak that “you’ll still be able to get guns no matter what,” but also that they are a “ridiculous” attempt “to disarm the American people.”

This prompted a disbelieving “Really?” from Berman, who got Limoges to admit that “No, maybe” Obama doesn’t want to take his guns away.

As for the gift, Limoges said that Donald Trump was “impressed” by the gun, and true to form was “inquisitive” as to the country of origin of its parts. Limoges assured him his was a locally-sourced assault weapon.

Here’s the real irony, though. Limoges said that the Secret Service took the gun from his shop, removed the firing pin, and gave it back to him just before he was to present it to Trump, meaning that the only people who have ever tried to confiscate Mark Limoges’ gun were Donald Trump’s Secret Service detail.

Watch the insane clip above, from CNN.