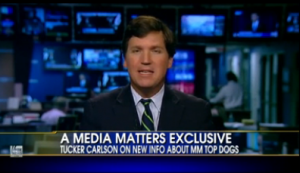 On Sunday, conservative news and opinion site The Daily Caller published a lengthy report on Media Matters, the high-powered — and, the article reports, highly influential — liberal media watchdog group. The article, published by site founder Tucker Carlson and senior online editor Vince Coglianese with contributions by reporters Alex Pappas and Will Rahn, takes a look not only at the organization’s influence on major media outlets, advertisers and the White House, but also offers a portrait of Media Matters’ head, David Brock.

Media Matters’ power is not only in drawing attention to or commenting on instances of media bias or quibbles among various political personalities, notes the Daily Caller, but on enacting real changes in networks, usually by going after specific news makers with the help of kindred organizations. For example, Media Matters — working in conjunction with the NAACP, the National Association of Black Journalists, and the National Action Network — was instrumental in bringing attention to radio host and former MSNBC personality Don Imus comments regarding the Rutgers women’s basketball team — attention that ultimately saw Imus being fired from the network. The same held true for the organization’s efforts regarding those advertisers working with CNN’s Lou Dobbs and Fox News’ Glenn Beck.

High profile though these victories against conservatives were, Media Matters has perhaps achieved more influence simply by putting its talking points into the willing hands of liberal journalists. “In ‘08 it became pretty apparent MSNBC was going left,” says one source. “They were using our research to write their stories. They were eager to use our stuff.” Media Matters staff had the direct line of MSNBC president Phil Griffin, and used it. Griffin took their calls.

Stories about Fox News were especially well received by MSNBC anchors and executives: “If we published something about Fox in the morning, they’d have it on the air that night verbatim.”

That influence also extends to print and online outlets, with several well-known reporters named in the report as being particularly amenable to Media Matters’ tips and stories. Among those named is Ben Smith, formerly of Politico and currently of BuzzFeed. According to an unnamed former staffer, Media Matters knew Smith would “take stories and write what you want him to write.”