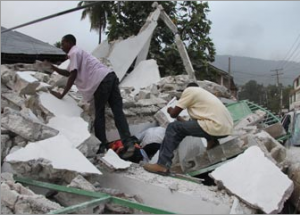 Today’s big news story was Conan O’Brien‘s flip-off to NBC — until the Haiti earthquake. Late in the afternoon at around 5 p.m. EST, a 7.0-magnitude earthquake struck Haiti just outside Port-au-Prince, the capital city and one with one of the highest population densities in the world. The huge earthquake — by all accounts the worst that region has seen for hundreds of years — caused massive damage to the city, with building collapsed into rubble everywhere, trapping people underneath, and reports of mounting casualties. There have also been a number of powerful aftershocks, one reaching 5.9 on the Richter scale. The president’s palace has sustained damage; one of the earliest reports was of a hospital collapsing. CNN reports that the headquarters for the U.N. Peacekeeping Mission outside of Port-au-Prince has collapsed. These are poignant and telling indicators of just how challenging it is and will be to get aid to this stricken, suffering land.

It’s a pretty awful story, and has been getting more awful as details have emerged. That’s why it was jarring to turn to MSNBC at around 7:30 and see the previously-run version of Hardball, talking about the “Game Change” and Harry Reid and the like. On CNN, Jessica Yellin was anchoring live coverage, carrying Secretary of State Hillary Clinton‘s live statement pledging that the U.S. would send humanitarian aid and “both civilian and military disaster relief.” I was struck by the fact that this was the Hillary Clinton that mattered in 2010, and at this moment; the details of Game Change are certainly interesting, but at that moment, the distance between then and now couldn’t have seemed more stark. 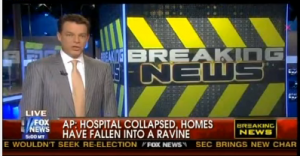 On Fox News, Shep Smith said “Reports from on the ground are that every other structure in Haiti is either down or damaged, at least in Port-au-Prince.” On MSNBC, Chris Matthews was on, this time returning to 2001 and the timeline of 9/11 based on Rudy Giuliani’s idiotic remark. Again, the at-the-moment relevance seemed a little wanting.

At 8, Campbell Brown continued the live coverage. FNC’s “O’Reilly Factor” is pre-taped at 5 p.m. and, to my knowledge, ran as such (including his interview with Sarah Palin, newly-anointed FNC analyst). On MSNBC, Keith Olbermann was in the middle of a long, scathing intro promising to rip into steroid-user Mark McGwire. I was confused, wondering aloud on Twitter: “Is MSNBC live? Olbermann teased McGwire steroids heavily up top, started with Palin, McCain and Game Change. CNN still on Haiti.” I wasn’t sure until the very end of the show — there had not been a single reference to Haiti, which, for someone with one eye on Tweetdeck while compulsively checking out CNN, felt jarring. The throw to Rachel Maddow was clearly live though.

Maddow opened her show with the breaking news of the Haiti quake, and the report below. I stayed with her until she moved on to other topics, and then I switched back to CNN. Larry King opened with the earthquake, then had a long segment about Leno and Conan with Donald Trump and Dick Cavett before switching back to live coverage around half-time. Then Anderson Cooper took over, saying “It is night in Haiti. Cries can be heard echoing through the streets – cries for help, cries of pain.” Switching back to MSNBC, I saw that they were rerunning Olbermann. 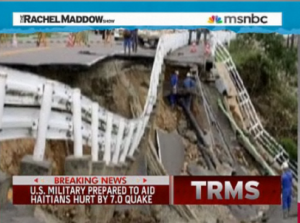 At 11, I stuck with CNN. A few minutes in, our tips line got an email: “No tips, just interesting to see MSNBC actually covering news outside of their scheduled blocks!” I switched — it was Rachel Maddow, as scheduled — but she was live. She’d stuck around to do her show live, and the coverage was great. David Shuster was there, too, saying: “The epicenter of the earthquake could not have been in any worse location.” Oh sure, they know this now; obviously Haiti’s high population density, poor population and vulnerable infrastructure weren’t enough of a tip-off that a 7.0 magnitude earthquake would be devastating.

I have complained before in this space about MSNBC sticking with taped programming over real breaking news, after they gave the Christmas Day near-bombing on Detroit-bound Northwest 253 a miss — and at HuffPo before that. It is MSNBC’s call how to allocate their resources in this challenging environment, and they have made their priorities pretty clear. But still, I feel bound to say it, again: If you’re going to call yourself a news network, then cover the news.

Back on MSNBC, live at around 11:20, Rachel Maddow spoke with Raymond Joseph, Haiti’s ambassador to the United States. She thanked him, saying “I understand your time is incredibly valuable right now. Good luck to you, sir, and we do appreciate it.”

“Thanks for the solidarity with Haiti,” he said.

Here are some clips of the coverage: Two reports from CNN (including Tom Foreman doing a “Haiti 101” segment on AC 360, which was very informative), and Maddow’s introductory clip at the top of her 9 p.m. show.

Update: A commenter points out that Fox was weak in prime time as well, beyond O’Reilly. I confess that I stayed with CNN through most of the 9pm hour until shortly after 11.

Photo via the New York Times.