Haley Barbour: Obama A ‘Cheerleader’ In Wake Of Sandy, Government Has Done Little To Help 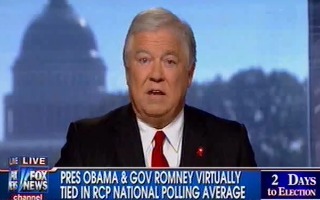 Former Mississippi Gov. Haley Barbour appeared on Fox News Channel where he was asked if he thought it was appropriate for Republicans to attack New Jersey Gov. Chris Christie for his response to Hurricane Sandy and his embrace of President Barack Obama. Barbour pivoted off that question was also critical of Democratic partisans who he said were actively attempting to spin Christie’s praise for Obama’s handling of the aftermath of that storm into an endorsement. He also said that praise of Obama’s response to Sandy was misplaced as the president has a small role to play in a disaster and the federal government has not helped the states impacted by that storm.

Secondly, Barbour said that the left is being disingenuous in their attempt to spin Christie’s partnership with the federal government as an endorsement of President Obama.

“Christie is just doing what any good manager would do,” said Barbour. He said that the president’s supporters mislead when they claim that Christie has praised Obama for being anything other than responsive to requests for support in the wake of Hurricane Sandy.

“The administration has very, very, very little to do in the first few days other than the president be a cheerleader,” said Barbour. “So far, the federal government has done very little to help these states. And that’s not a criticism of Obama, that’s just the way disaster relief works.”