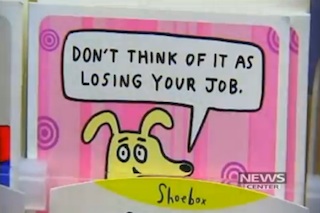 Despite the best attempts from greeting card companies around the world, there are still like 50 days out of the year that haven’t been classified as holidays. So, in an attempt to boost sales, someone at Hallmark has come up a new demographic that, in America, is second only in size to “People Who Have Birthdays.” That’s right, they’re now releasing sympathy cards designed for those who have recently been laid off.

Yes, because there’s nothing unemployed people like more than knowing their friends still have enough money to spend $5.99 on a piece of paper.

Stores have a specific section for job loss and recession humor, offering words of support and encouragement.

With the unemployment rate at nine percent, the company says customers called-in the need.

Bah ha ha ha! Man, if only unemployed people could spend food stamps on Dilbert books, they could really get over not having a job! Bosses are so stupid, am I right? Especially when they fire you and make it so you can’t feed your family and with each day you spend unemployed you get less and less hirable and why do I even need to get out bed today I mean it’s not like anyone expects me anywhere as I have absolutely nowhere to be and I could just die and no one would notice and I still have student loans.

So, question to the unemployed amongst you, if someone showed up at your door right now with a brightly colored piece of paper featuring a cartoon dog, a pun, and a poorly recorded version of a 90s one-hit-wonder’s chorus as conciliation, how likely is the chance you’d punch them in the face? Just curious.

You can watch Indianapolis’ WTHR news report below where they ask these same questions: