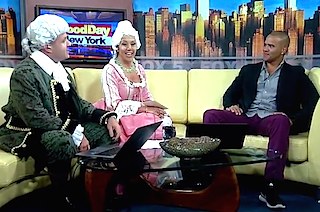 The new Broadway musical Hamilton has counted President Barack Obama and his family among its audience members, received one of the best New York Times reviews in decades and is pretty much sold-out for the next year. But on Good Day New York yesterday morning, it was more or less a joke.

The show uses hip-hop to tell the story of Alexander Hamilton and the American Revolution, and while there are some period costumes, there is nary a powdered wig to be found onstage. That’s what made hosts Greg Kelly and Rosanna Scotto’s 18th century get-ups so strange when they welcomed actor Christopher Jackson, who plays George Washington, to the morning show this week.

“I think he’s like shellshocked,” Scotto said of Jackson’s reaction to the costumes. Later, Kelly implied that “a lot of people were like ‘eh’ that won’t work” when they first heard the idea of a hip-hop version of American history. “It totally does apparently!” he exclaimed.

RELATED: ‘What Is Wrong With You?’: Morning Anchor Scolded for Ogling Reporter’s Body

Jackson did his best to keep it together during the interview, which ended with Kelly performing a freestyle rap about drive-by shootings, but after he left the set he used his Facebook page to blast the anchors for their behavior.

But then he decided he had a bit more to say, posting the following comment about the “small, petty, and uninformed” segment: 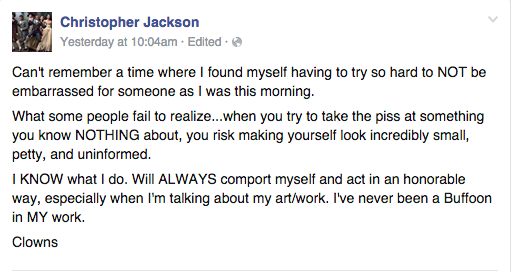 Watch the full interview below, via WNYW-TV:

UPDATE — 1:13 p.m. ET: A FOX 5 spokesperson had this to say in response to Jackson: “Our circus is No. 1. Lighten up.” Scotto and Kelly also addressed the criticism on-air today: