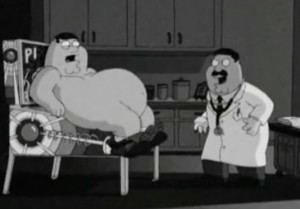 The reviews of Seth MacFarlane‘s performance at Monday night’s Oscars™ are rolling in, and are a predictable mix of brutal and middling, but thus far, seem to miss the most major of his crimes. Yes, the supposedly “edgy” jokes were long on contrived shock value and obviousness, and short on payoff. Yes, the Star Trek bit was self-indulgent and injurious to the sacred Trek canon, which will now have to figure out what ship Captain Kirk was supposed to have traveled back in time in, because it sure wasn’t any Enterprise we’ve ever seen. Yes, the “We Saw Your Boobies” song was a lazy, sexist, missed opportunity to satirize Hollywood’s double-standard on nudity. It also creepily made light of the most horrific rapes in cinema history.

The problem with Seth MacFarlane, who is a gifted mimic and performer, is his over-reliance on contrived premises and “shock” humor that don’t pay off with anyone but fans of the phrase “That’s so wrong,” a problem that was on proud display at last night’s Oscar™ Awards show. For example, his John Wilkes Booth gag didn’t bomb because it was in poor taste, it bombed because it was in poor taste and it was obvious, and it was paid off with an even more obvious kicker, the hacktastic “too soon” bit. Lather, rinse, and repeat for all of his jokes. The most offensive thing about them was that they were not funny.

They say humor is subjective, so if you don’t believe me, sample a few of MacFarlane’s jokes without the “edgy” dressing:

If you’re done laughing, let’s take a look at that last one, because although the thin setup posed the “We Saw Your Boobies” number as an example of a bad Oscar™ host, the premise satirized MacFarlane’s irreverence, not the nudity. Well, not until the “punchline,” which was that that Kate Winslet slut is constantly showing off those goodies:

The premise of the bit would sustain a five-second digression on Family Guy, but that’s an extremely low bar. As juvenile as it was (and I get that that was the point), the “Boobies” song could have been completely redeemed by the inclusion of a “We Saw Your Junk” verse, which would have lasted about 3 seconds, because Hollywood only likes to show lady-parts. MacFarlane could have even waved his pinkie around if he needed some extra “edgy” points. Having been told over and over again what a clever guy MacFarlane is, I kept expecting this to be the payoff, but nope. We saw your boobs.

Unfortunately, the bit didn’t stop at being simple and juvenile. Among the films and stars MacFarlane named for their mammary appeal were Charlize Theron in Monster, Jodi Foster in The Accused, and Hilary Swank in Boys Don’t Cry. The references literally made my stomach turn, but again, clever guy that he is, I expected them to pay off somehow. Nope. We saw your boobs.

I’m not one of these people who thinks that there are topics that can just never be funny, or who blanches at shock humor, but the more offensive the setup, the bigger the payoff had better be. In this case, the inclusion of these rape scenes doesn’t pay off at all, they’re just lumped in with other nude scenes in a cheap joke. MacFarlane the comic doesn’t seem to notice the difference.

It’s a free country, of course, and Seth MacFarlane can make all the cheap rape jokes he wants, but the rest of us should stop pretending he’s too “edgy” for Oscar™, and demand a host who’s just unfunny.