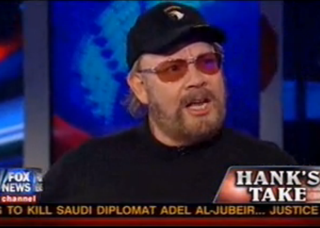 “We haven’t seen the last of Hank Williams, Jr.,” Sean Hannity declared today, as his guest, Williams himself, laughed and suggested that despite the unfortunate fulfillment of Godwin’s Law that got him dismissed from ESPN, he has a future in football. Williams was on the program to explain his side of the story, noting that it was “just an analogy” and that he apologizing, and that he’s still got a song to shop around and plenty of customers.

Williams reiterated to Hannity that he meant only to put together an analogy, giving a much more tame analogy to make the point this time than a golf game between Hitler and Benjamin Netanyahu: “why don’t we invite a bunch of Yankees fans and some Red Sox fans and have a love lunch?” He did not specify who would be President Barack Obama and Speaker John Boehner in this situation. But he didn’t dwell too much on clarifying the same point again, and instead told Hannity the subsequent events once he was removed from ESPN. “The next day, I went fishing,” he noted, saying that his daughter had been very concerned about his job, and that was the trigger for him to leave. “You can tell ESPN adios tonight,” he said he told his agent, and then went fishing again, because “now you’ve hurt my family.”

RELATED: Hank Williams Jr. Explains Himself On The View And Television Magic Is Made

Hannity thanked Williams for not apologizing, and Williams seemed not at all concerned about his future. “The song is mine,” he reminded Hannity, “there are other networks.” Hannity suggested that Fox was one of the networks that aired football, and while Williams didn’t specifically say whether he would be coming to Fox, concluded ominously, “I’ve got real close friends in the football world.”