Sean Hannity warned his viewers about the “very graphic nature” of what he was about to show before airing the video of rebel forces executing Syrian soldiers that The New York Times featured on its homepage earlier today. He then invited Fox contributors Allen West and Juan Williams to debate just who the U.S. will be helping if we attack Bashar al-Assad’s regime in Syria. 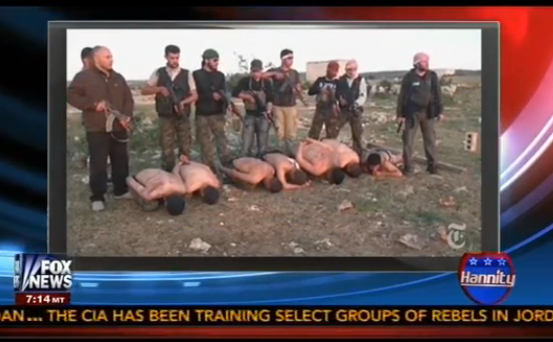 After reviewing some of the extremist groups that have infiltrated the civil war in Syrian, West warned against “degrading” the Assad regime only to “upgrade” the opposition. “Which opposition?” he asked. “You have to be very careful of that.”

Hannity laid out two worst case scenarios, one that “Syria and Iran will, in fact, retaliate against Israel” and, two, that America “could help Al Qaeda-linked rebels in their battle against Assad.”

Williams said it was precisely these risks that caused him to oppose intervention “until this weekend when I sort of switched sides and got the picture.” He said once he realized that this really is a “proxy war” with Iran did he acknowledge the importance of American action.

Calling Iran the “modern-day Nazis” who “want a modern-day Holocaust,” Hannity agreed with Williams in principle, but asked “if you agree with me they are the proxy here, wouldn’t it make sense that we really want to have an impact, rather than lob a few cruise missiles in to Syria–which I don’t think would be very effective based on days, not weeks and no boots on the ground–why don’t we do what we should do and that’s take out Iran’s nuclear sites?”

That was bridge too far for Williams, who called Hannity’s suggestion “a provocative act against somebody who has not attacked us or attacked any of our allies or threatened our national interests.” Instead, he said it would justification to strike Syria as a “signal” to Iran about their nuclear program. When Hannity continued to push military action Iran, Williams said, “you’re looking at big-time World War III actions.”

But according to West, “we will probably start a World War III” by simply lobbing cruise missiles into Syria.