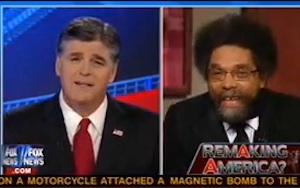 Princeton professor Cornel West appeared on Fox News’ Hannity, his first time since 2006, and was grilled by host Sean Hannity over inflammatory comments he had made on CNN back in October about then-Presidential candidate Herman Cain, where he said “Get off the symbolic crack pipe and acknowledge the evidence is overwhelming”, referring to Cain’s dismissal that racism held people back in a significant way. “By symbolic crack pipe, what I meant was he’s living in Never Neverland, anybody that downplays the prison industrial complex, when it comes to the way our brown sisters and brothers are treated with immigration policy, when it comes to the glass ceiling still at work even though we have a black president, racism is still real!”

RELATED: Cornel West On CNN: Herman Cain Needs To ‘Get Off The Symbolic Crack Pipe’

“You believe that racism is very much real in America?” West asked Hannity.

“Of course, absolutely!” Hannity exclaimed. “But Herman Cain, — he was called a bad apple, trying to curry white favor. the Tea Party, the base likes him because he’s a black man who knows his place‘, you’re talking about the proverbial or symbolic crack pipe…Racism is repugnant, we all agree, I’m a Christian, we’re brothers in Christ, the point is — why would you use such language because you disagree with him and why are African-Americans beaten up, called names, with impunity, It would never– if you’re liberal and African-American it’s fine. If you’re conservative, you can’t have your own thought process without being called these names. Don’t you find that repugnant? I bet deep down inside you do.”

“I only reacted to him saying that racism was not still operating in society to the degree to which it’s holding people back,” West clarified. “If he’s saying something I agree with, I agree with that! There’s a host of conservatives who are black, white, and red and what have you. Dr. Robbie George is my dear brother. Deeply conservative. You know, we teach together at Princeton… I can say you or him at times — out of touch with reality — on the symbolic crack pipe!”

Watch West defend his crack pipe comments with Hannity below via Fox News: