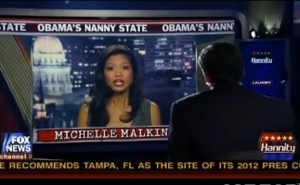 Some issues seem to transcend political debate. For example, take the Clinton administration’s efforts to curb underage smoking, just after the disasterous mid-term elections of 1994. Everyone can agree that kids shouldn’t smoke! Similarly, one would think that the epidemic of childhood obesity is a fight that everyone can get behind, right? Not so. As Sean Hannity and Michelle Malkin last night attacked the efforts of First Lady Michelle Obama, in part because she used to sit on the board of a company that profited from junk food.

While Malkin and Hannity make some legitimate points in the following clip, they do appear to be missing the forest through the trees. For example, in the eyes of Malkin, the epidemic of childhood obesity appears to pale in comparison to the scourge of the “nanny state,” or as she puts it:

“We can laugh about it now, but it is a serious and dangerous issue. The amount of control they want to exercise on our lives.”

Um…I don’t think anyone will find anything funny about the following interview (nor childhood obesity.)