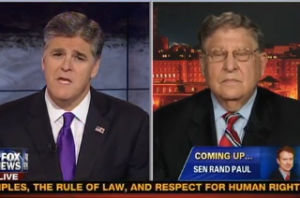 Sean Hannity tonight took NBC News anchor Brian Williams for telling actor Alec Baldwin in the latter’s podcast that he has “profound disappointments in my country.” Hannity and guest John Sununu piled on Williams for showing his true colors as a member of the liberal media. Hannity also used the segment to revisit media coverage of the 2012 campaign, with him and Sununu agreeing that President Obama won re-election thanks to an “ass-kissing, suck-up, lapdog media.”

RELATED: Brian Williams Tells Alec Baldwin: ‘I Have Profound Disappointments In My Country’

Hannity cited Williams’ comments as another brick in the wall of liberal media bias, telling Williams that many Americans find it more disappointing that “people who work on your network are burying stories” about the Obama administration. Sununu said just because Williams has a “pretty face and a smooth voice,” there’s “not necessarily anything behind that.”

Hannity brought up how Ann Romney blamed the media for her husband’s failed presidential bid. Sununu admitted that the GOP made a “horrible mistake” in letting journalists like Williams moderate the primary debates, citing a “holier-than-thou” question about the death penalty. Sununu alleged that the media “aided and abetted Obama’s distortion of reality” on the economy.

Hannity still found it amazing how little the media vetted Obama during his 2008 campaign and never ask him basic questions about his record. Sununu attacked Obama’s inflexibility on the sequestration negotiations which he said led to all the big spending cuts. Hannity called for a more “vigilant media,” as opposed to an “ass-kissing, suck-up, lapdog media.” Sununu predicted that a large majority of journalists voted Democratic in 2012, saying that the GOP needs to have a powerful enough message to off-set media bias in future elections.