Hannity Blows Up At Austan Goolsbee Over White House Party: ‘You’re On Drugs! You Can’t Be Serious!’
video

Hannity Blows Up At Austan Goolsbee Over White House Party: ‘You’re On Drugs! You Can’t Be Serious!’ 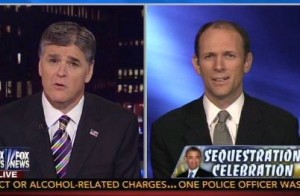 Sean Hannity opened his show mocking President Obama‘s “Memphis Soul” White House party tonight as a “sequestration celebration.” He reminded viewers that it has been exactly one month since the White House decided to end public tours, calling out the “celebrity president” for warning of the devastating effects of sequestration while still holding celebrity-filled parties. Hannity brought on former Obama economic advisor Austan Goolsbee to defend his former boss. Goolsbee argued that economy was improving, contrary to Hannity’s claims, which amazed Hannity and led him to shout at Goolsbee, “You’re on drugs! You can’t be serious!”

Hannity cited polls showing a majority of Americans disapprove of Obama’s handling of the economy and the deficit, and brought up the most recent job numbers to ask how the president has the nerve to hold parties. Goolsbee told Hannity that in the bigger picture, the economy is better now than when Obama took office, and insisted that “things are getting better.”

Goolsbee brought up the fact that Obama voluntarily gave up a portion of his pay in solidarity with furloughed government workers. Hannity responded, “Cry me a river!” and shouted at Goolsbee, “You’re on drugs! You can’t be serious!” Goolsbee brought up how Ronald Reagan also had lavish events at the White House, but Hannity shot back that it was during a time of prosperity. They argued for a bit over how both Reagan and Obama handled economic recession.

Goolsbee admitted that many people have been leaving the labor markets under Obama, but attributed it to the workforce getting older. Hannity ended the segment by telling Goolsbee that he is “living in an alternate universe” and “in a hypnotic trance” if he really believes what he’s saying.