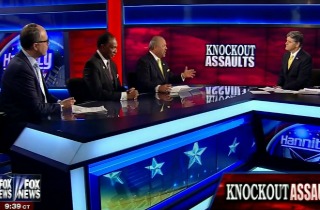 On Tuesday, Fox News Channel host Sean Hannity took aim at a variety of media outlets which accused him and other Fox hosts for focusing on the “knockout game” and alleging that this represents a new uptick in racial violence. Hannity joined former NYPD detective Bo Dietl in praising MSNBC host Al Sharpton who denounced the attacks as “racist.”

Hannity singled out editorials in the Los Angeles Times and The Daily Beast which accused him and others concerned about the violent game of inciting anger over a “phony panic.”

RELATED: CNN ‘Knockout Game’ Expert: ‘Not Every Black Kid Is Doing This’

Dietl revealed that he was attacked on social media outlets for calling “the knockout game” a violent pastime being perpetrated by “young black youths” against “white females” and “white males.”

He added that he later ran into Sharpton and asked his opinion on the issue. Dietl revealed that he after he spoke with the MSNBC host about the issue, Sharpton wrote a piece for The Huffington Post where he denounced the attacks as “racist” and a form of “cowardice.”

“The mainstream media are cowards on the particular subject,” said Fox News Channel contributor Peter Johnson Jr. “They don’t want to take it on. You have taken it on.”

While all agreed that it was appropriate of Sharpton to have spoken out against the attacks, the panel exploded over whether anyone should care what Sharpton has to say on issues due to his checkered relationship with violence in New York City in the past.