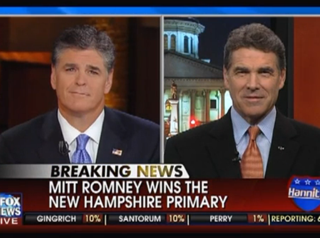 Rick Perry had an indisputably rough night in New Hampshire. In fact, tonight, his eyes were entirely on South Carolina, and, on Hannity tonight, he didn’t even bother to talk about New Hampshire. But his night got worse as Sean Hannity challenged him on his claims that Mitt Romney was a “vulture capitalist”– going so far as to claim that Perry sounded like a member of Occupy Wall Street.

RELATED: South Carolina Woman Welcomes Rick Perry: ‘Good To See Someone As Homophobic And Racist As You’

Perry began the segment attacking President Obama, but Hannity quickly shifted gears to the “very harsh words” Perry has had for Romney. “It almost sounds like Occupy Wall Street,” he noted, “it doesn’t sound like someone who is governing Texas as a conservative.”

“There is a real difference between venture capitalism and vulture capitalism,” Perry replied, adding that “venture capitalism we like; vulture capitalism, no.” He justified his attacks saying that “the fact of the matter is he’s going to have to face up to this at some time or another.” Hannity wasn’t satisfied with this answer, asking Perry whether he was saying “that Mitt Romney is a vulture capitalist, that he is unethical.” Perry specified that he thought what happened with two specific companies bought by Bain was “irresponsible,” and that “the folks in South Carolina agree with that.” Hannity replied that it was still “as severe as they can get” as far as attacks go, though Perry insisted there were places where Bain had “destroyed people’s lives.”