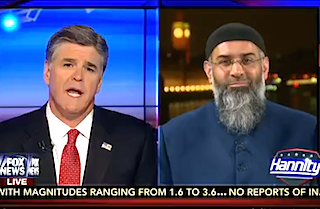 At the end of a day in which terrorists in Paris killed 12 people at the offices of satirical magazine Charlie Hebdo, Fox News’ Sean Hannity faced off with his frequent sparring partner, British Muslim Imam Anjem Choudary, who was arrested in a UK terror raid last fall.

Following this morning’s attacks, Choudary sent out a series of tweets that could be seen as defending the motives of the terrorists, who presumably objected to the magazine’s cartoons of the Prophet Muhammed:

Muslims love the Messenger Muhammad (saw) more than their parents, children and even themselves! Why don't people understand? #ParisShooting

We must see what the honour of the Prophet means to Muslims after Salman Rushdie, Hirsi Ali, Theo Can Gogh & Terrance McNally #ParisShooting

Freedom of expression does not extend to insulting the Prophets of Allah, whatever your views on the events in Paris today! #ParisShooting

Unsurprisingly, Choudary saw his views differently and the two men shouted over each other for several minutes without ever really hearing what the other was saying. At one point, Hannity began listing off some of the most damning sections of the Qu’ran and confirming that the Muslim activist agreed with things like stoning adulterers and homosexuals.

“I still think you’re an evil SOB,” Hannity said at the end of the interview, “but I really want people to hear you.”