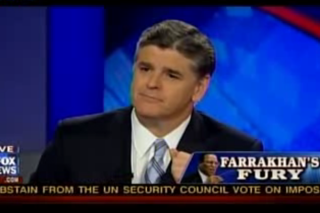 Nation of Islam head Louis Farrakhan may be Muammar Gaddafi‘s only fan stateside, but he’s loud enough to make up for his small number. His comments shouting down at President Obama “Who the hell do you think you are?” on a radio show last week condemning the Libyan intervention made waves for their novelty, but to Sean Hannity, they resurrect the spectre of 2008’s most hated religious figure: Jeremiah Wright.

On tonight’s “Great American Panel” segment, Hannity allowed his guests to take the first swing at Farrakhan, who all agreed was going to bat for Gaddafi. But Hannity was less interested in the tie between Gaddafi and Farrakhan and that between Farrakhan and Wright: “This is the same Farrakhan,” he argued, who Obama “of course knew nothing about” being friends with Wright. To this Democratic strategist Steve McMahon heaves a heavy sigh of “here we go again,” emphasizing that “Obama doesn’t take advice from Farrakhan” and that, in fact “every time Farrakhan does something like this, it helps Obama because it makes him look reasonable.”

This conversation about Farrakhan was too unrelated to Wright for Hannity’s tastes, though, and he persisted. “20 years in his church, I’m not going to get into it,” Hannity said, before proceeding to “get into it:” “Why can’t I ask these questions?” Hannity continued, indulging his late aughts nostalgia by going through a litany of 2008 campaign questions about the relationship between Wright and Obama, and Wright’s controversial comments. Meanwhile, fellow panelist Cal Thomas, contrary to McMahon’s approach, decided to fan the flames a bit, asking “why [Farrakhan’s] calling President Obama ‘brother’– is he a religious brother?”