Hannity Guest Confronts Steven Crowder: ‘You Deserve What You Got’
video

Hannity Guest Confronts Steven Crowder: ‘You Deserve What You Got’ 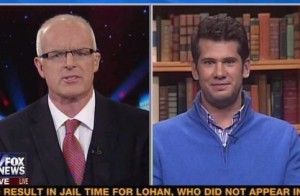 Sean Hannity continued to focus on union violence tonight and the plight of Fox News contributor Steven Crowder, who was punched while in the middle of a union protest in Michigan against right-to-work laws. Hannity brought Crowder back on his show tonight, along with union supporter Andy Sullivan, who not only opposed both Hannity and Crowder’s positions on unions, but accused Crowder of releasing an edited tape and telling him he got what he deserved.

RELATED: Steven Crowder Challenges Protester Who Punched Him To Come Forward: ‘Jail, Or Face Me Like A Man’

Hannity warned that the union violence might be an omen of things to come, including “blood in the streets” and “at some point, people may die.” He touted how unions are losing, even in states where unions are considered particularly strong, and criticized President Obama for not condemning violence on the left.

Hannity brought up to Crowder how the people involved in the Michigan protest yesterday vigorously denied they tore down the tent, which Crowder practically laughed at. He dismissed criticism that he edited the video, and even if he did, he pointed to “hours” of footage of similar union violence on YouTube. Sullivan said Crowder’s video was “well-edited,” saying he saw video of Crowder pushing someone down.

Crowder immediately responded to Sullivan, and both of them got in a shouting match that led to this exchange (with quite a bit of crosstalk):

Crowder: He was attacking a tent with women and children in it! People were pulling him off!

Sullivan: Oh, he was attacking a tent! Then what were you doing?

Crowder: We were there trying to prevent people from being hurt in the tent!

Sullivan: Listen, Steve, you deserve what you got!

Crowder: You are a liar, sir!

Sullivan: You deserve what you got.

Sullivan scolded Crowder for taking potshots at union members who are just trying to speak out to protect their livelihoods. He said that union leadership are undoubtedly “taking advantage of” their members, but the violence Crowder says is widespread just isn’t so. Crowder described the scene yesterday as a “melee” and said even if he had lacked restraint, it would not have justified his getting assaulted.

Sullivan said that he doesn’t “need to be schooled by you” on unions, to which Crowder shot back with, “You just were!” Hannity asked Sullivan why right-to-work isn’t fair, which Hannity framed as “freedom of choice.” Sullivan agreed that there should be less “dictatorship” in the way unions are run, but said right-to-work laws are just too extreme.