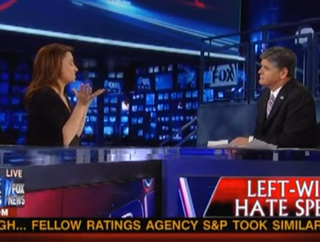 After Ann Coulter appeared on Sean Hannity‘s program to discuss the legacy of Andrew Breitbart and the way the left responded to his death, Hannity invited liberal commentator Julie Roginsky to discuss boycotts and what he considered was a left-wing desire to silence dissenting voices. Roginsky disagreed by defending Coulter in the most backhanded ways possible, threatening to quote Coulter verbatim in a way that would result in federal communications fines.

“Ann Coulter has the right to say whatever nonsensical piece of crap she wants to say, same thing with Andrew Breitbart,” Roginsky noted, agreeing with Hannity when he added Bill Maher to the list. While she found it “ridiculous to say that I’m happy anyone is dead,” she thought the left had the same right to say so as the left did when Breitbart attacked Ted Kennedy posthumously.

Hannity’s argument, however, was not what was acceptable, but why the left insisted on boycotts and removing dissenting voices while the right merely fought arguments they considered off-base. As a counter-example, Roginsky brought up the work of Newsbusters, but Hannity noted they did not call for boycotts, only featured speech they disagreed with on their site. Roginsky could not come up with a boycott on the right but admitted she wasn’t an expert on conservative media, but defended Media Matters’ First Amendment rights, as well as Hannity’s. “You probably have the largest audience of anybody on cable… you have the right to say whatever you want.”

Hannity replied that he did not have freedom of speech “because there is an infrastructure on the left” designed to take people like him off the air. “You have the most free speech of anybody!” Roginsky countered, noting that having Ann Coulter on the show was an expression of that. “Ann Coulter has said things that are so incredibly offensive… she has called people offensive names that are horrific, names I can’t say here because the FCC would probably fine your show.”

Hannity made two distinctions: that Coulter was not a host and that the right would never boycott someone like her on the left. “I don’t want to silence anyone,” Hannity noted. To add to her argument that she did not, either, Roginsky evoked Limbaugh, too: “Rush Limbaugh called somebody a slut the other day– God bless!”